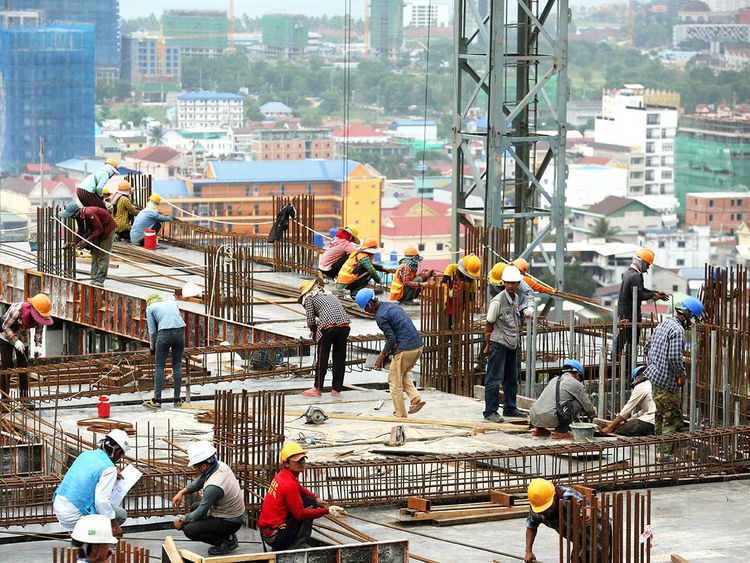 Posted at 21:24h in Investment by vuthy 0 Comments

Cambodia has changed radically from a centrally planned economy to a market economy over the past ten years. Moving away from the earlier one-party state, it now has a democratic system of governance and sustainable peace after decades of civil war. With consistent support from the global community, all of this has led to rising productivity, while labor costs continue to be competitive. Today’s Cambodia is transitioning from being a pre-emerging to an emerging market.

Looking at Cambodia as an investment option ten years ago would have seemed far-fetched. From a Third World struggler to an up-and-coming Asian force, Cambodia has come a long way. According to a report released in December 2012, Cambodia’s future prospects are favourable for the upcoming five years with a forecasted average of about 7% economic growth per annum.

After the 1991 Paris Peace Agreements, the United Nations Transitional Authority in Cambodia (UNTAC) paved the way for the nation’s first national elections. This gradually took Cambodia out of the turbulent period of civil war.

In the 1990s Cambodia earned the reputation of being an NGO-driven economy, sustained by the expatriate staff of the UN, multi-lateral agencies and NGOs operating in the country. But during this period, the government revised its investment laws to position Cambodia as a market-friendly economy for foreign direct investment (FDI).

One of the biggest contributors to Cambodia’ progress has been FDI. Since 2004, the bulk of FDI has come from Asian countries, including Malaysia, Korea, Vietnam, Thailand and China – which have solely accounted for more than 50% FDI contribution . Over the past decade, FDI has taken off in five key sectors:

The garments & footwear sector has accounted for 84% of total exports in the first half of 2012, with a total worth of USD2.4 billion.

The construction sector has been growing at an average of 11% per annum.

The agriculture sector consists of crops, poultry and livestock, forestry and fisheries, and food processing. According to a report, total milled rice exports at the end of 2012 stood at 205,717 tons, up by two per cent from 2011.

The garments & footwear sector has accounted for 84% of total exports in the first half of 2012, with a total worth of USD2.4 billion.

WHAT DOES CAMBODIA HAVE TO OFFER INVESTORS?

Cambodia offers investors a number of favorable investment conditions, including:

Cambodia’s open economy is one of the most important factors to consider when comparing its investment climate with that of neighboring countries. It was the first country in the Mekong Region, excluding Thailand, to fully adopt and implement a market economy. Unlike in most other neighboring countries, investors can own 100% shareholding in local enterprises.

Cambodia is endowed with extensive marine, forest and agricultural resources, providing a good “base” for a range of natural resource-based industrial activities. It has ample fertile land for the production and processing of agricultural commodities, and holds much potential for livestock farming and aquaculture. Mining is also a promising sector; there are many areas with abundant mineral deposits yet to be explored. Considerable off-shore gas and oil reserves are available for exploration and production.

The tourism industry is very competitive in Cambodia, thanks to the presence of strong tourist attractions, such as the stunning archaeological sites of Angkor Wat, as well as many islands and beaches. The number of inbound tourists surpassed 3.2 million in the first half of 2012; a rise of 24% over the 25.8 million visitors recorded during the same period in 2011. This presents good market opportunities to develop resorts, tourist attractions and supply tourism-related products or infrastructure.

Cambodia has one of Asia’s lowest-cost workforces, with over 200,000 new entrants to the labor force annually. The number of “trainable” workers is in abundance. The literacy rate has also surpassed 75%. These factors may allow Cambodia to undercut production costs in other countries – including China, where increasing production costs pose challenges for business.

Cambodia’s past elections have ushered in a new era of peace, democracy, local development and respect for human rights. After years of war and isolation, Cambodia has now become a member of the regional and world community at large.

Cambodia is strategically located between the two much larger and more developed economies of Vietnam and Thailand, enabling it to play the role of an entrepot and hub. It is also situated within close proximity of India and China, the economic powerhouses of the 21st century. Lastly, it is situated on the Gulf of Thailand, providing easy accessibility to maritime trade.

CHALLENGES IN INVESTING IN CAMBODIA

Despite being an attractive investment market, Cambodia is not void of impediments on the road to progress. Like many developing nations, investing in Cambodia can be an uphill task. Investors should be mindful of the following issues:

This is one of the most blatant problems crippling the economy. According to the Corruption Perceptions Index 2012 by Transparency International, Cambodia is ranked 157 out of 176 countries, in terms of the level of corruption.

Cambodia’s 1994 Law on Investment established an open and liberal foreign investment regime. All sectors of the economy are open to foreign investment with 100% foreign ownership in most sectors. However, a few sectors are subject to conditions, local equity participation or prior authorization from the authorities. These include manufacturing of cigarettes, movie production, rice milling, exploitation of gemstones, publishing and printing, radio and television, manufacturing of wood and stone carvings, and silk weaving.

This is one of the major issues hampering the country’s competitiveness and growth. The road transportation system remains inefficient and underdeveloped, and the railway system is in a poor state. Although the effectiveness of ports has improved, the cost of shipping remains expensive. Moreover, the power supply is costly, inadequate and, to some extent, unreliable. Telecommunications coverage remains limited.

According to the Corruption Perceptions Index 2012 by Transparency International, Cambodia is ranked 157 out of 176 countries.

HOW FDI IS CHANGING CAMBODIA

From the economic point of view, Cambodia is exposed to minimal foreign exchange risk, as it has a largely “dollarized” economy. It has a strong financial position due to relatively low levels of sovereign, corporate, and consumer debt. According to The World Bank, GDP is expected to increase by an average of 6.5% annually, driven by private investment and strong exports.

The country’s dependence on foreign aid is not hidden, with large international transfers coming under Official Development Assistance (ODAs) accounting for more than 50 percent of the government’s budget. 30 percent of GDP comes from investments in the agricultural sector , and further investments in garment manufacturing and tourism have also given the economy a huge boost.

The growing garment manufacturing industry and tourism have opened up employment opportunities for Cambodia’s youthful labor force. 61% of Cambodians are under the age of 25 and the median age is 21.

According to Cambodia’s Millennium Development Goal (CMDG), an extension of the United Nations MDG, there has been a gradual reduction in poverty levels and income inequality. This is due to the influx of FDIs that has led to job creation in sectors such as the thriving tourism industry.

Infrastructure in Cambodia is a continuous work in progress. Efforts are being invested in improving and upgrading transport connectivity via bridges and road links with neighboring countries. All railroad systems are being rehabilitated as well.

The sea port in Sihanoukville has expanded and modernized, and the one in Phnom Penh has also been expanded and relocated to ensure its accessibility to new deep sea ports in Vietnam. Travelling by air has become more convenient, due to the establishment of three international airports in Phnom Penh, Siem Reap, and Preah Sihanouk; making the country far more accessible.

There have also been significant expenditure savings for internet and mobile users, due to increased competitiveness among service providers. Meanwhile, energy cost is being reduced through the replacement of oil-based power plants by coal-fired and hydropower plants.

Cambodia has come a long way from the past decade to become a very interesting investment opportunity for global business investors today. Many countries are investing heavily through FDI in various sectors including agriculture, tourism and construction.

In the final analysis, Cambodia remains a small country, with a population of 14 million versus 90 million-strong Vietnam and 65 million-strong Thailand. Its importance to global business should not be over-estimated.

But it is of growing strategic importance to global business as a niche location – a potential trading and logistics hub for the Indochina region, as a natural resource and tourism play and finally as a low-cost base for labor-intensive manufacturing.

Cambodia’s successes are a tribute to what can be achieved with an open, market-based economy, while its shortcomings similarly reveal the shortcomings of a liberal approach to economic development.