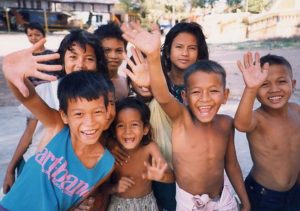 Cambodia attained lower-middle-income status in 2017, having sustained an average growth rate above 7% in the past decade, mainly driven by garment exports and tourism. Economic growth is expected to remain robust in the medium term as recovering tourism activity and fiscal expansion compensate for some easing in garment exports and construction growth. In the future, maintaining macroeconomic stability and enhancing economic diversification, export competitiveness and quality of public service delivery will be key to sustaining higher growth.

Cambodia, formerly the Khmer Empire, is located at the southern region of the Indochina Peninsula in Southeast Asia. Cambodia is currently the 70th most populous country in the world with an estimated 2019 population of 16.49 million, an increase from 2013’s estimation of 14.9 million. 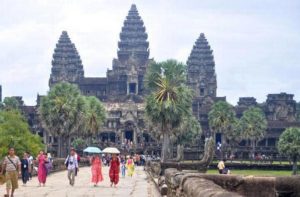 Only 20% of the people in Cambodia live in urban areas, and there aren’t many large cities. The largest city is the capital city of Phnom Penh, with a population of 1.5 million, and 2.2 million in the metropolitan area. Phnom Penh is the country’s economic and trade center and is presently growing at a faster rate than the city’s resources allow for. The next largest city is Battambang, with a population approaching 200,000. There are a few other smaller cities in Cambodia with populations approaching 100,000 including Ta Khmau, Serei Saophoan, Siem Reap, and Kampong Cham.

The demographics of the country are very much influenced by the civil war and later genocide, and 50% of the population is under 22 years old. It also has the most female-biased sex ratio in the region. 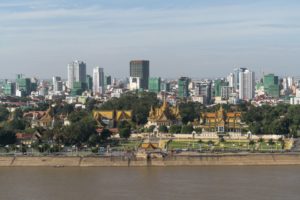 Khmer is the official language of Cambodia, coming in with 97% of the population using it on a regular basis, with other languages at only 3%. 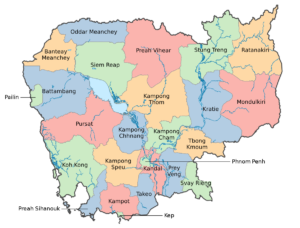 The Ministry of Education, Youth and Sports is responsible for establishing national policies and guidelines for education in Cambodia. The Cambodian education system is heavily decentralised, with three levels of government, central, provincial and district – responsible for its management. The constitution of Cambodia promulgates free compulsory education for nine years, guaranteeing the universal right to basic quality education.

There are no restrictions to a business being 100% foreign-owned in Cambodia, so long as no land ownership is involved. In order to set up a business in Cambodia, you will need a valid visa, a work permit and a Cambodian bank account with a minimum balance of US$1,300 (even though the law officially only states a minimum capital requirement of US$1,000). An online business registration system was launched by the Ministry of Commerce in December 2015. The idea behind this online registration system is to make the process of registering a business in Cambodia more transparent and efficient, which should, in turn, attract more investors.

Traditionally, most foreigners coming to the country start Cambodian businesses in the tourism industry. This means bars, restaurants, guesthouses or tour companies. Many from other areas of Asia also find success expanding their existing operations in manufacturing or production. Currently, it is increasingly, there are companies springing up in the tech, real estate and financial sectors. This is because the country has reasonably good technical infrastructure and a quickly growing and urbanising population.

One of the biggest attractions of starting a business in Cambodia is the affordable real estate here. What’s more, it can be easy to find a space for sale that is already set up for what you need.

While it’s relatively easy to set up a business in Cambodia, it can be hard to ensure it flourishes, as the landscape is competitive. It’s important to thoroughly research the market and be sure of the feasibility of your brainchild beforehand.